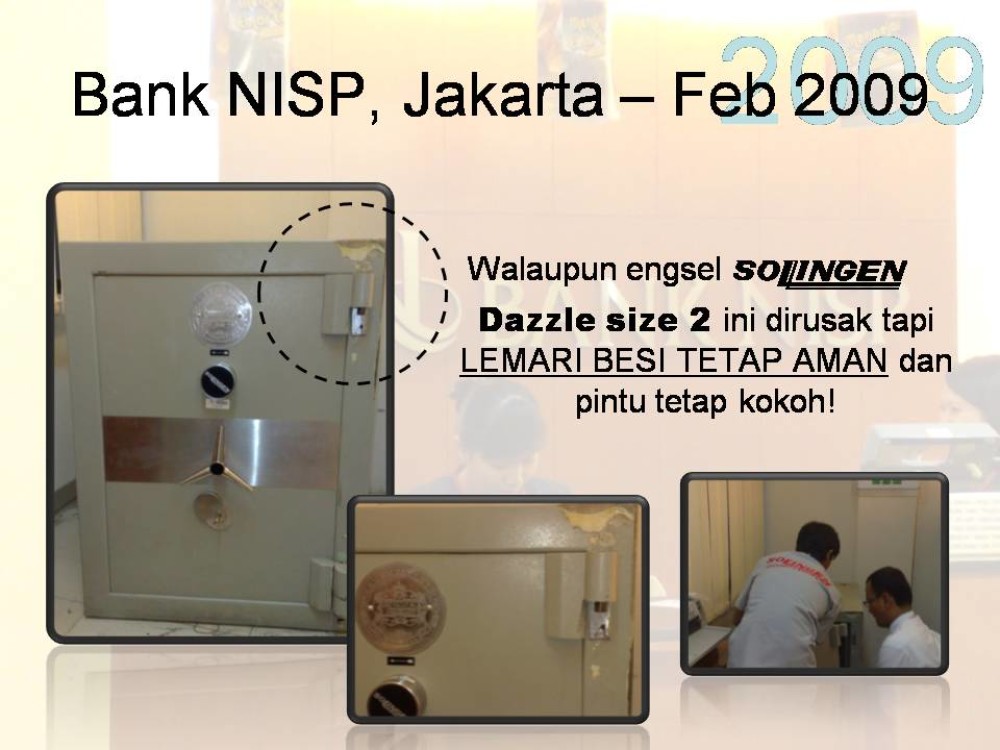 In February 2009, another type of unusual attack happen in a city bank NISP in Jakarta.  The target this time was protected by Sollingen Dazzle, a standard-security vault that is very common to be used in banks.  The burglars disabled the alarm system and have all night working to penetrate the vault.  After the whole night, the burglars gave up with the vault stand strong with minimal damage in the upper hinge. 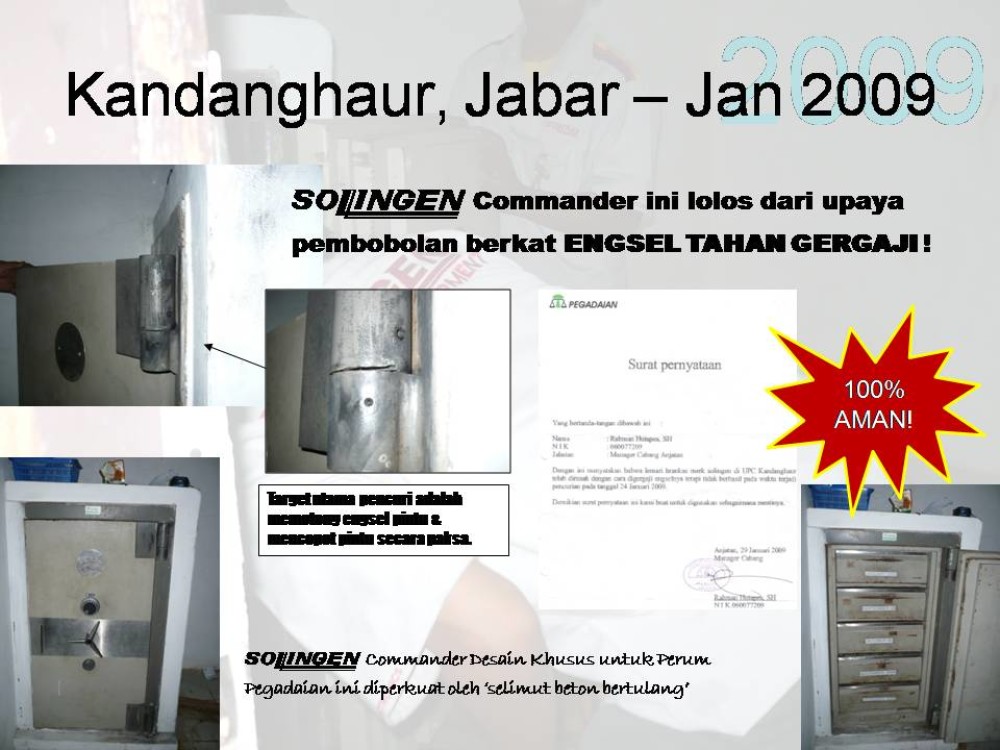 In January 2009, some high-skilled burglars targeted a government-operated pawn shop Perum Pegadaian in Kandanghaur, West Java. Unlike the traditional way of breaking-in, these burglars tried to saw off the safe hinges and to force-open the safe.  Fortunately, a premium line of Sollingen safe, the Commander was there waiting for them.  Equipped with saw-proof hinges, and concrete blanket, the burglars didn't stand a chance at all.  Only minor bruises on the safe was found. 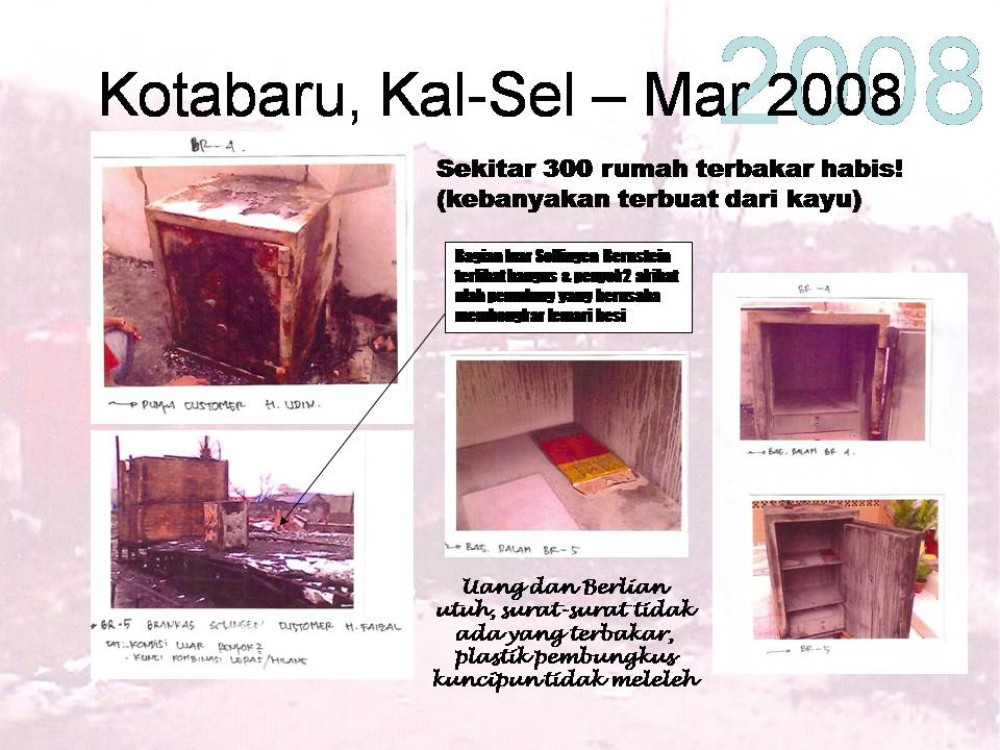 In March 2008, there was a big fire in Kotabaru, a small town in South Kalimantan (Borneo), burning down about 300 houses.  Being located remotely from the city, it is quite common to have some local thiefs trying to break into safes hoping for a loot following the fire incident.  Fortunately, our mid-sized Sollingen Bernstein was there to prevent further damage.  The entry-level security container was able to protect money, diamond, and important documents. 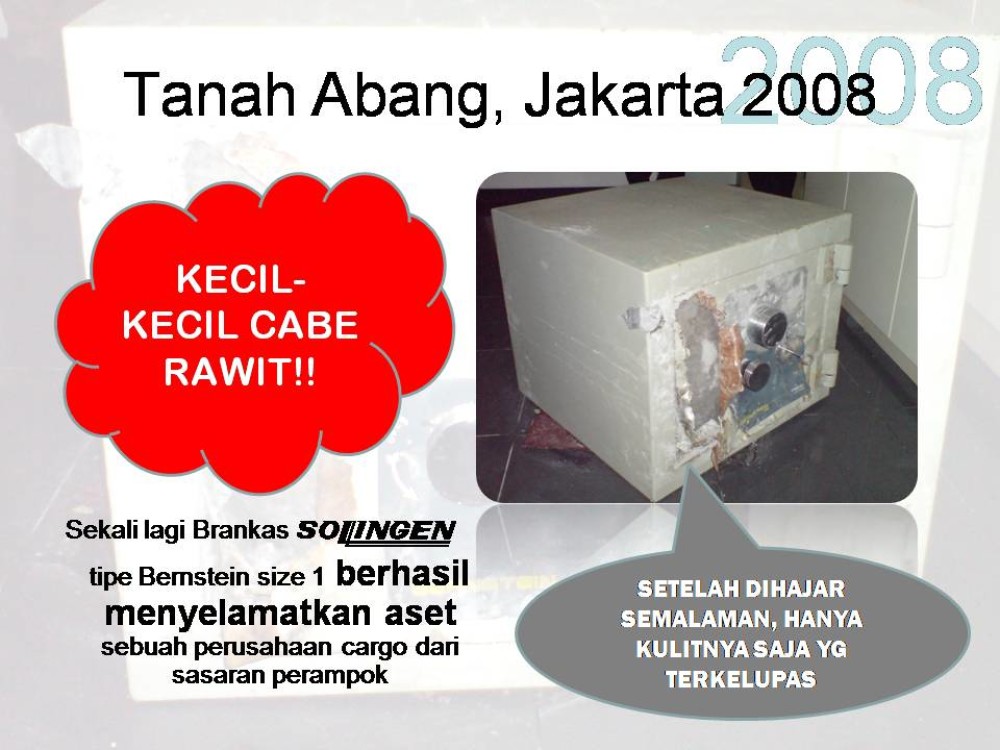 Sollingen Bernstein is a small and simple safe, but when it comes to fighting burglar, it doesn't compromise at all.  After one-night being smashed around by some burglars in a cargo company located in the city of Jakarta, our little safe managed to save the asset.  O what a night! 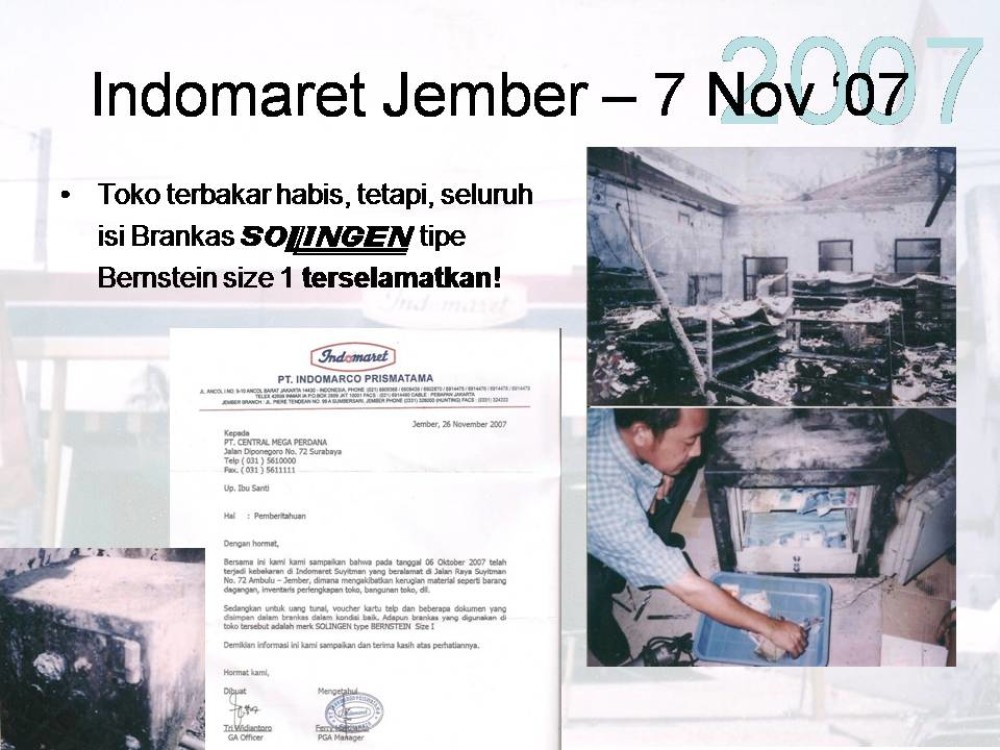 On November 7, 2007, an Indomaret store in Jember, East Java experienced a fire hazzard. The entire store including the building was burned down, but luckily, the entire contents of a Sollingen Bernstein size 1, the smallest safe in Sollingen safe line, saved the day.  Phone vouchers made of plastic, some cash and some documents was found in good condition. 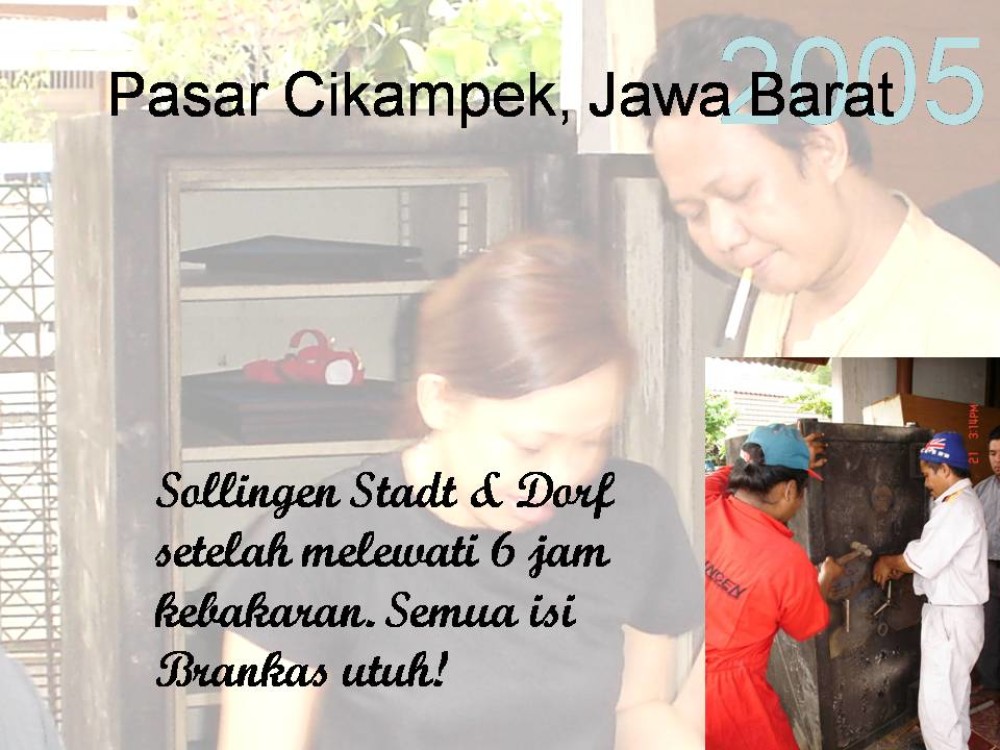 2005 Six-hours of fire in Cikampek

Another success story of a Sollingen high-security safe, Stadt & Dorf after going through a six-hours of fire in Cikampek Market, West Java.  All content was found safe. 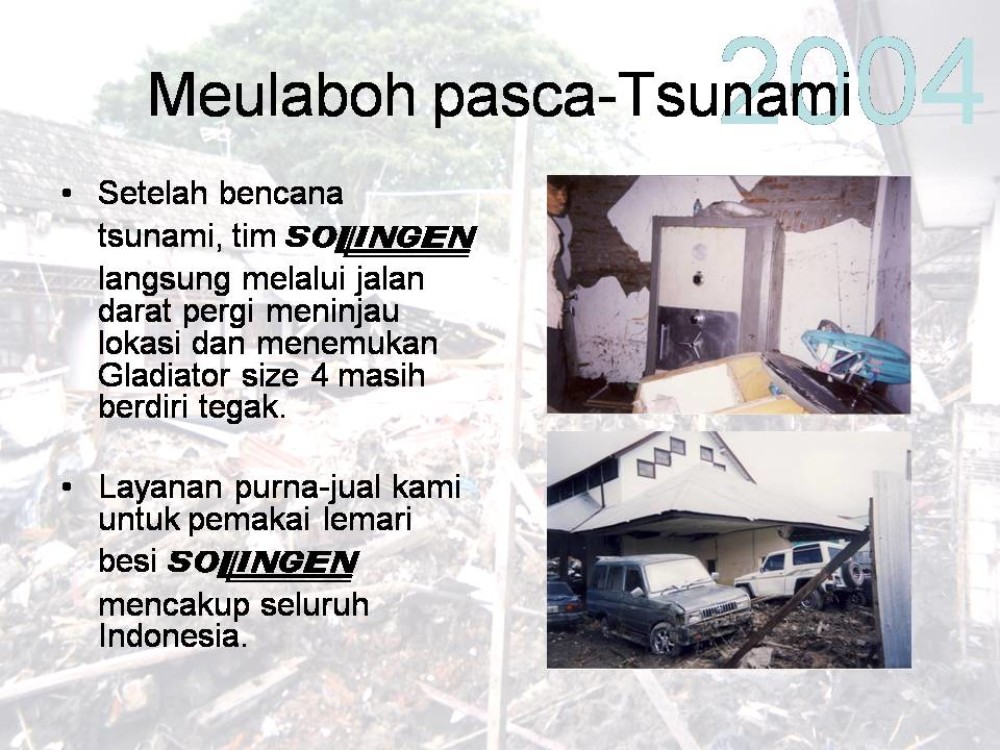 On December 26, 2004, the third-largest earthquake was recorded on a seismograph with an epicentre off the west coast of Sumatra, Indonesia. Aceh was the most devastated region struck by the tsunami. Right after the disaster, our technical team was dispatched to Meulaboh, Aceh area via ground route to assist our customer there. Our high-security safe, Sollingen Gladiator, was found standing tall despite the earthquake and tsunami. 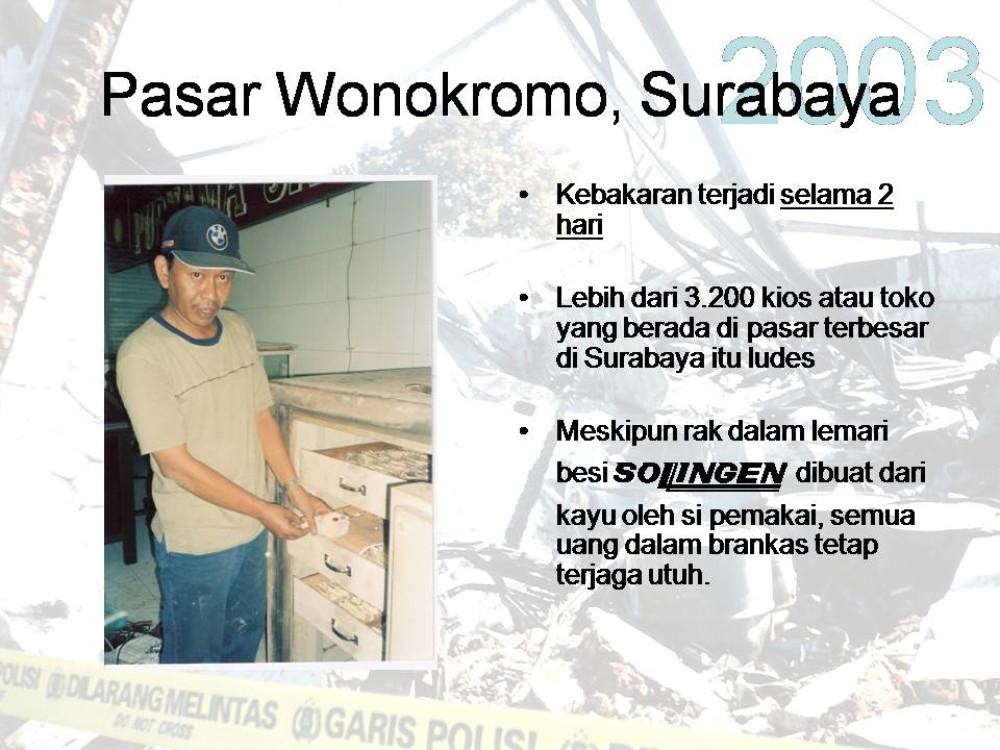 One of the largest fire incident happened in Wonokromo, being the largest market Surabaya at the time.  The fire was there until two days and more than 3200 stalls or shops within the market were burnt to ashes. Through this incident, Sollingen vaults managed to save lots of assets of their user.  This particular case is quite unique that the customer has retrofitted wooden drawers inside the vault, yet the Sollingen vault was still able to save his money inside. 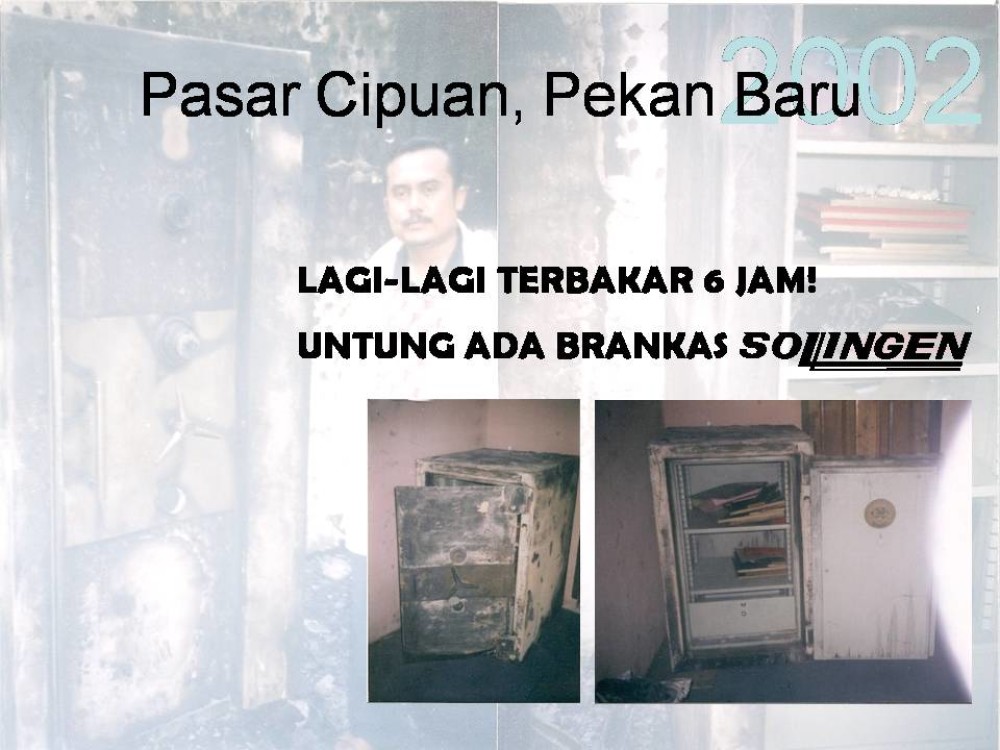 Pada tahun 2002, Cik Puan Market of the city Pekan Baru was caught on fire again.  And once again, Sollingen vaults were burned for another 6 hours, and again ALL CONTENT WERE SAVED. 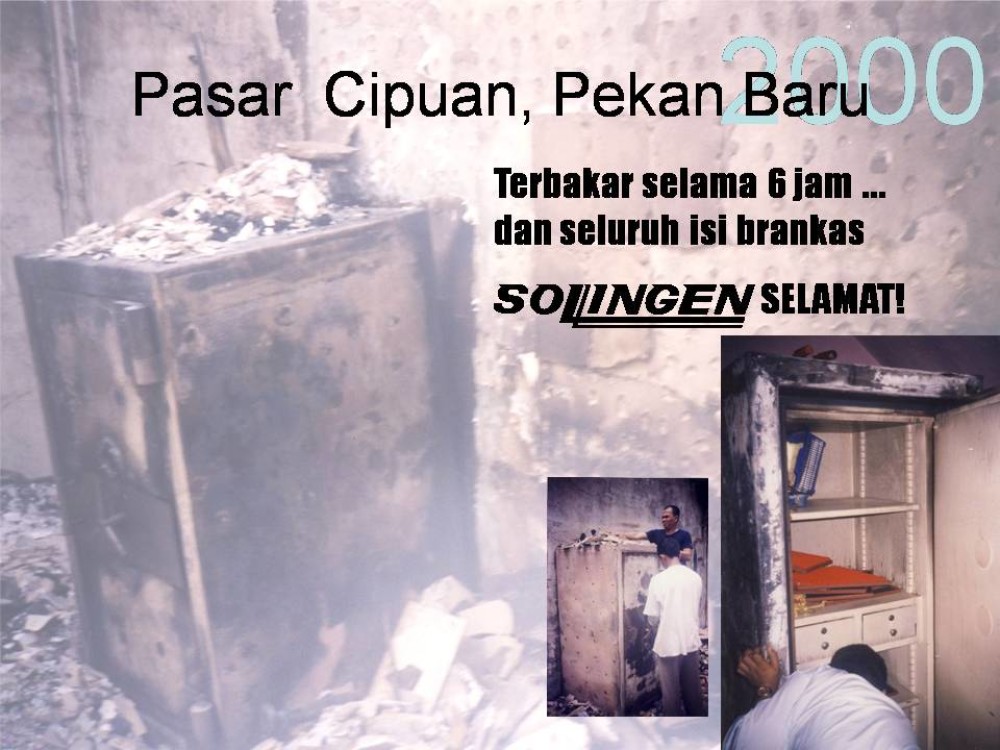 In 2000, Cik Puan Market located in Pekan Baru was caught on fire for 6 hours.  Fortunately, major gold shops in the market trusted their assets in Sollingen vaults.  All content of vaults were SAVED. 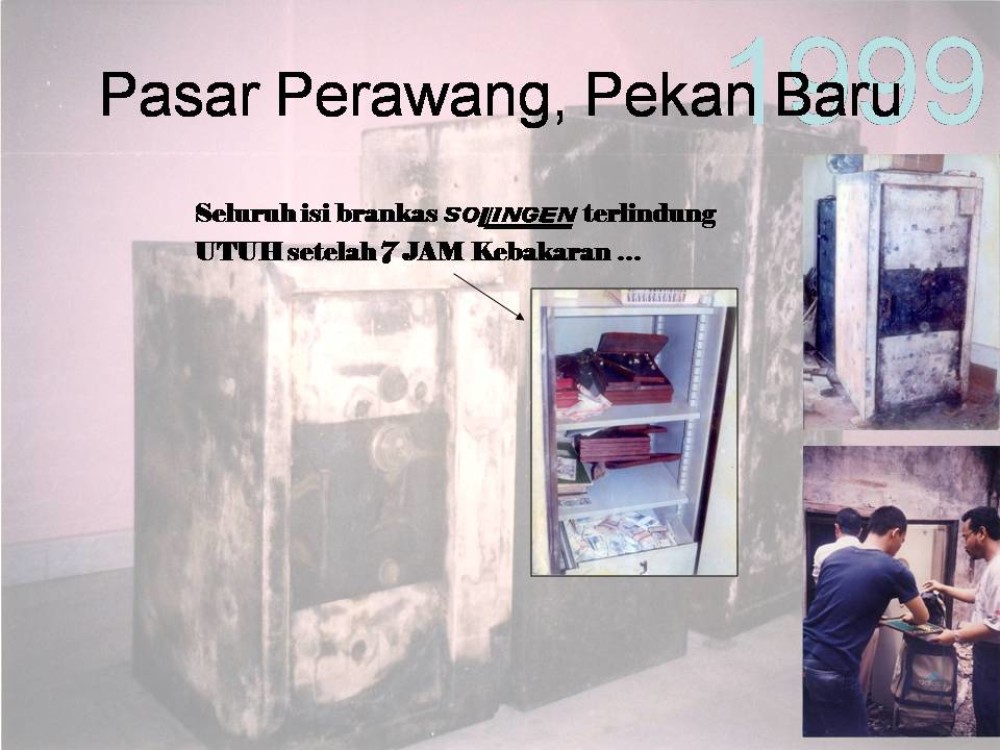 In 1999, a fire swept through Perawang Market, Pekanbaru, Sumatra. Sollingen vault was burned for 7 hours, but as expected, the entire contents of the vault were protected intact. Here are photos of the incident. 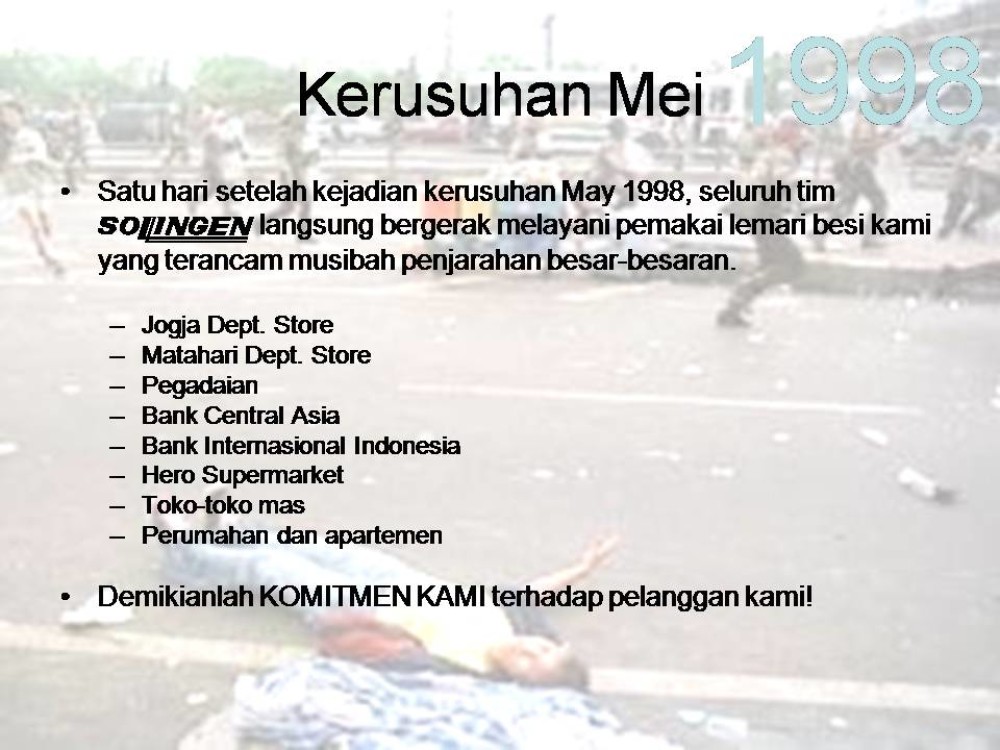 1998 The May Riots of Indonesia

The Riots were incidents of mass violence and mass burglary of a racial nature that occurred throughout Indonesia. Many Sollingen vault users, such as large dept stores, banks, gold shops, etc. desparately relied on our help to retreive their leftover valuables. At that moment, all Sollingen service crew were spontaneously dispatched.  This is OUR COMMITMENT to provide a solid safeguard. 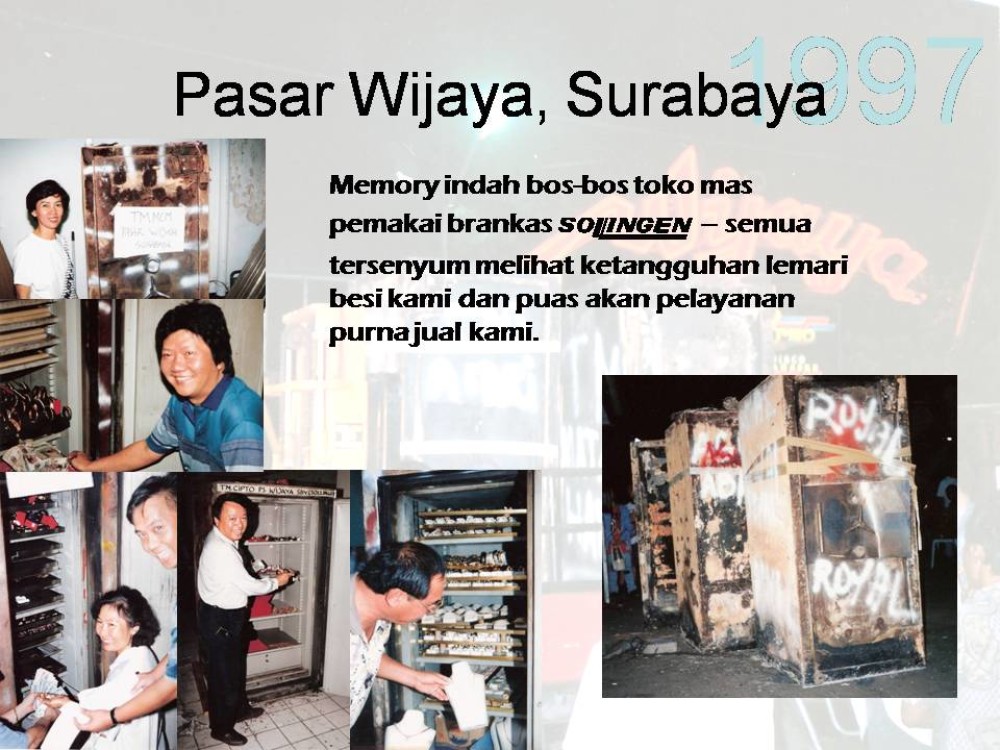 Unforgettable moment in Sollingen history.  East Java being the main hub for gold trading, and this Wijaya Market being the home for large gold retailers and wholesalers was caught on a massive fire.  Empty faces and tears turned to big smiles after witnessing the toughness of Sollingen vaults, and the relentless effort of Sollingen service crew. 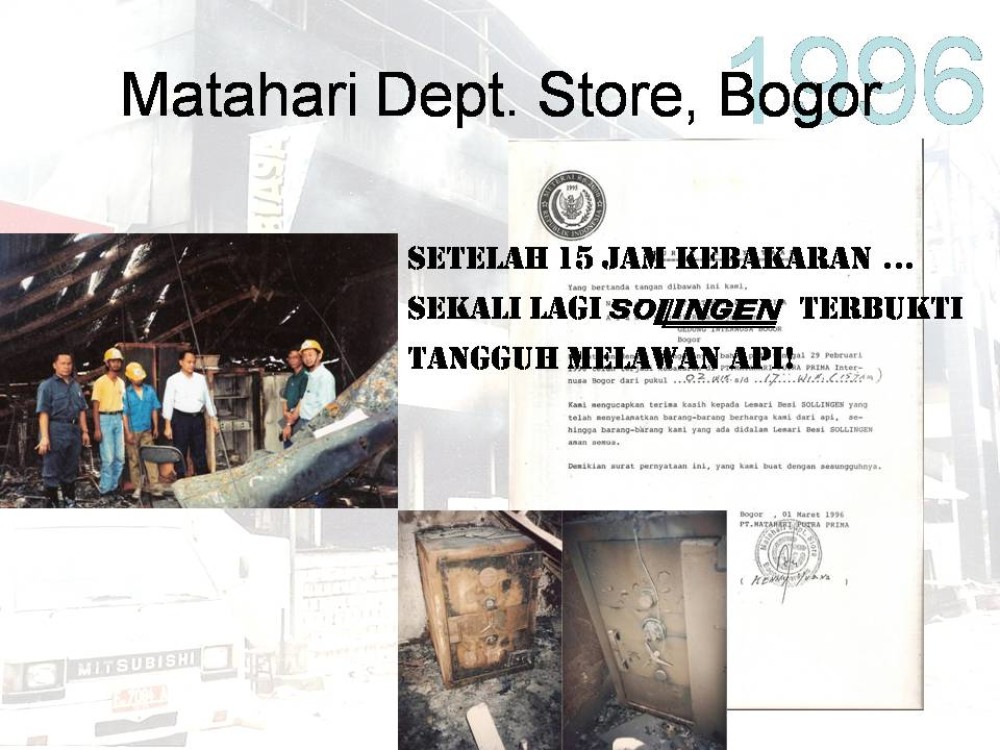 On a special date of February 29th, 1996, a major fire struck one of the largest department store (Matahari) in Bogor.   Fire incident occurred so large that it took 15 hours for the firemen to extinguish them. Here are some pictures and a thank-you letter from the Sollingen vault user as the vault successfully saved the store assets. 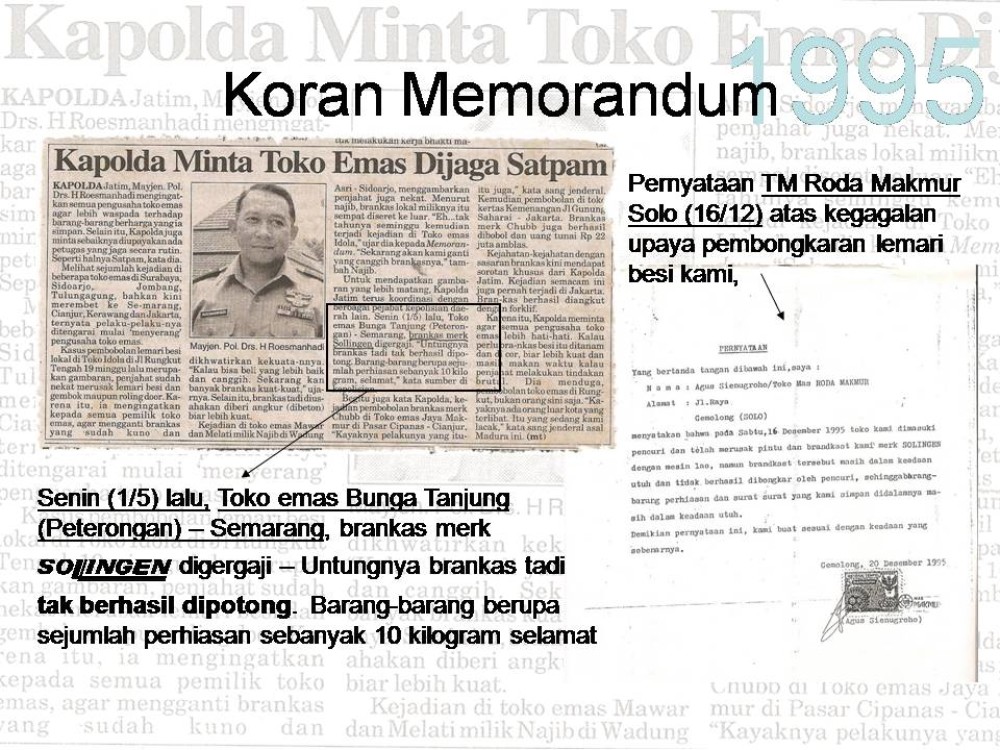 Burglary attempts: 1. May 1st at Bunga Tanjung Gold Shop, Semarang, targetting on 10kg of jewelries. 2. Dec 16 at Roda Makmur Gold Shop, Solo. Both attempts failed due to the power of Sollingen vauts. Police Chief called for other gold shops to fight crime by replacing their old vaults wiith newer and more sophisticated ones, like Sollingen. 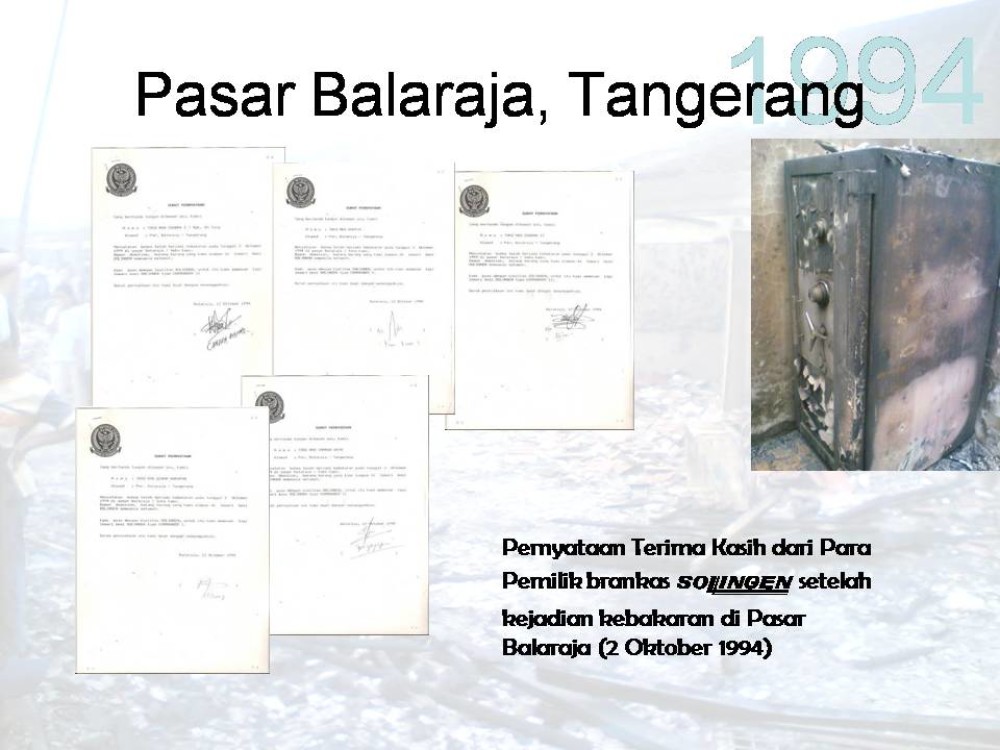 1994 Thank you letter from Balaraja Market

On October 2, 1994 a major fire hit the Balaraja Market in Tangerang. The fire wiped out the entire market and leave only a handful of vault which managed to save the assets of the trader.  Here are a few thank-you letter from the owner of the Sollingen safes during the incident. 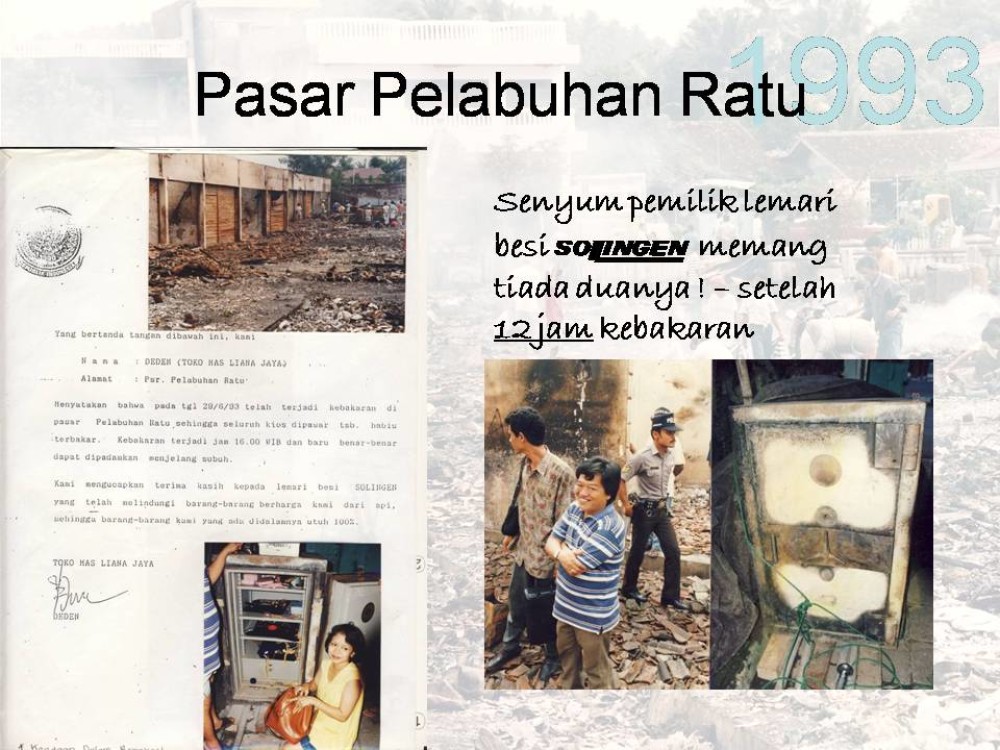 On June 29, 1993 at 16:00 pm, a major fire struck the Pelabuhan Ratu market so that all the market stalls were burned out. The fire was not completely extinguished until before dawn. Here we attach a picture that matters to us the most: THE SMILE of Sollingen vault owner after the 12 hours fire. 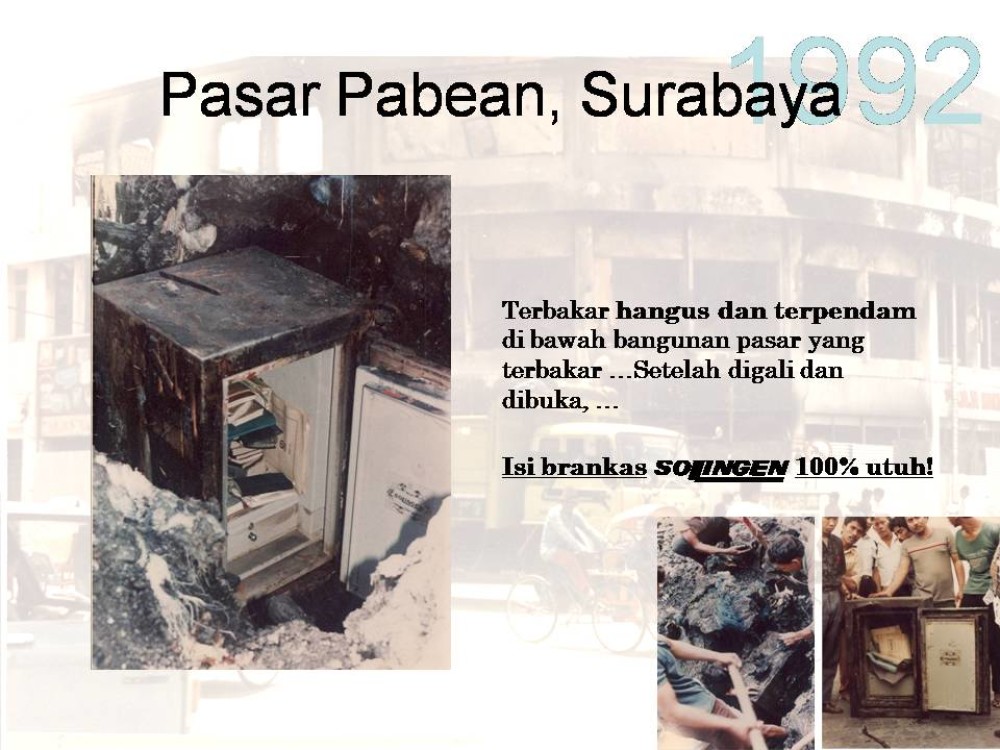 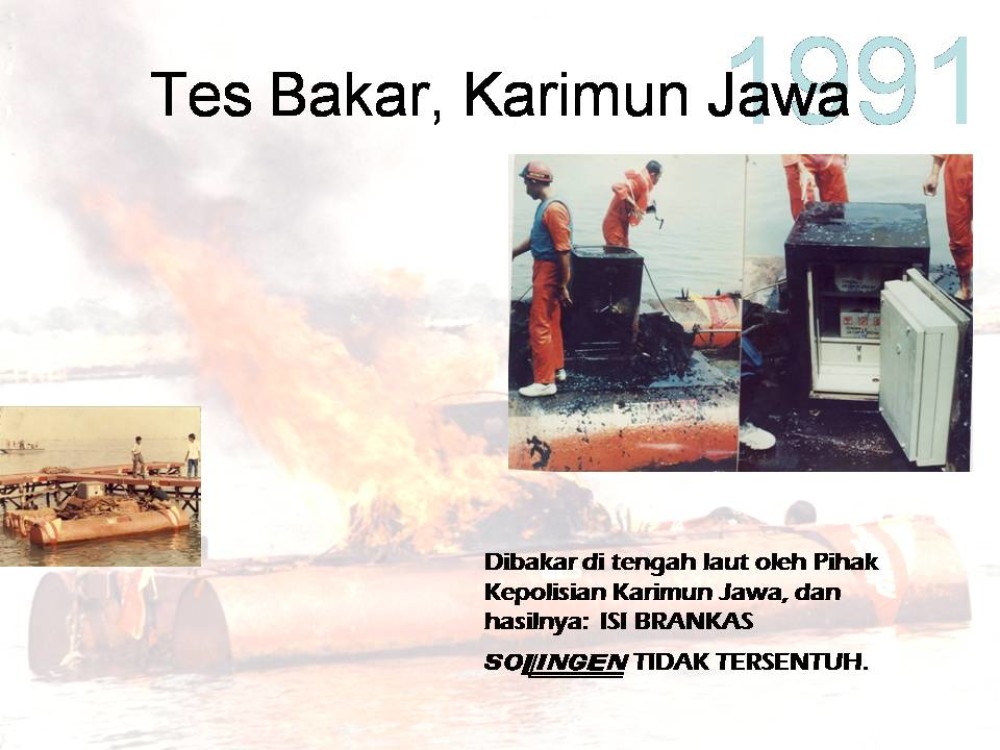 The burn test was carried out on a barge in the middle of the Karimun Jawa waters. The background image shows the Sollingen Stadt & Dorf vault among the wild blazing fire being burned up, After opening, visible safe exterior charred black, while the inside of a safe is clean white, noting that all forms of documents, money, and including alcoholic liquor stored in it are still intact.

At the heart of each Sollingen personel, the motto "YOUR SOLID SAFEGUARD" is engraved as a promise to provide the best security to protect our customer.